Find us on Social Media:

New York State is a bustling place, and commuting here can be a struggle. Most people who commute by road using public transport and private motor vehicles may spend hours traveling. This means hours of productivity lost while trying to get to and from work or their errands.

This is why some New York residents have opted for an alternative mode of transportation – cycling. New York City currently has about 800,000 active cyclists who frequently ride their bicycles to work and use them to run errands. As a result of the state’s growing green initiatives and the increasing number of cyclists in New York City, the state government has made efforts to accommodate bicycle riders in the state.

Unfortunately, the high number of cyclists, motorbikes, passenger cars, trucks, and other road users increases the chances of a bicycle accident. If you or a loved one has been injured or killed in a bicycle accident, you may have the right to seek compensation for injuries or wrongful death. To secure satisfactory compensation, an experienced bicycle accident attorney at Hill & Moin LLP may be able to help you.

Bicyclists in New York city are afforded extra protection by the New York City Administrative Code Section 19-190, otherwise known as the Right of Way Law. This law provides that any driver of a motor vehicle who fails to yield to a bicyclist who has the right of way is guilty of a traffic infraction. In the event that a motor vehicle that fails to yield additionally causes personal injury to a bicyclist, the driver shall be guilty of a misdemeanor and subject to a monetary fine. This law was designed to strongly protect the safety of bicyclists in New York City from reckless or negligent drivers.

If you are injured as a result of a motor vehicle in New York City, make sure you contact an attorney familiar with the Right of Way Law as soon as possible.

Even though New York has become a bike-friendly state, cyclists still need to take proper precautions while riding their bicycles around the city.

Common bike accidents in New York include the following:

All bicycle accidents in New York can cause serious injuries. Bicycles do not have the protective enclosure that passenger vehicles have. They are also not as sturdy as those vehicles. This leaves all cyclists potentially in danger of being badly injured.

If you have been hit by other vehicles and want to pursue damages or proper compensation, you need the help of the experienced New York bicycle accident attorneys of Hill & Moin LLP. We have compassionate and driven lawyers who may be able to help you secure compensation for any personal injury you may have sustained in the crash.

Call Hill & Moin LLP at (212) 668-6000 to speak to a compassionate and knowledgeable bicycle accident lawyer today.

The reality is that most bicycle accidents in New York City and throughout the State of New York can be prevented. Understanding the common causes of these cycling accidents may be crucial to your case.

To help you get the appropriate settlement, your attorney must establish that the drivers of the vehicle that struck your bike was negligent or violated the law.  To do that, let us look at what causes bicycle accidents in New York City and the State of New York:

These are among the most common causes of bicycle accidents in New York. Unfortunately, whenever there is a bike accident involving a motor vehicle, the cyclist may sustain severe injuries.

In some instances, these accidents can lead to death. According to the National Highway Safety Traffic Administration (NHTSA), 857 cyclists lost their lives in bicycle accidents in 2018. That is 857 too many.

If you or a loved one has been involved in a bike accident, you may be able to seek recompense for any injury you sustained or file a wrongful death case on behalf of your late relative. If you would like to know more about pursuing your case, get in touch with us at Hill & Moin LLP today.

When a cyclist is involved in a bicycle accident, he or she can suffer a wide range of injuries. The severity of the cyclist’s personal injury may depend on various factors.

Treatment can be expensive depending upon the extent of injuries.

Some of the more common injuries in a bicycle accident include:

These are just a few of the common bike injuries that cyclists sustain if they are involved in an accident. Every personal injury that you or a loved one gets from a bike accident can be financially draining and physically painful. Worse, the personal injury can cause death..

If you have suffered any personal injury in a bicycle accident, you should get in touch with Hill & Moin LLP right away. As an experienced bicycle accident law firm in New York, we are committed to helping victims of bicycle accidents secure the compensation they deserve.

Our New York City-based law firm may be able to help you. Contact Hill & Moin LLP at (212) 668-6000 to speak to a knowledgeable bicycle accident attorney.

What to Do After a New York Bicycle Accident

Some bike accidents initially seem minor until symptoms of pain become unmanageable. Thus, you need to take every precaution possible. Bicycles are exposed and lack enclosed protection. As a result, when cyclists crash or collide with other road users, their injuries may be serious.

Some of the injuries sustained in a bike accident may not become obvious for days or weeks. Instead of waiting until it is too late to file a claim, you need to be proactive about getting checked out by a medical doctor as soon as possible.

Here is what you need to do to ensure that you have the best chance of recovery:

We understand that it may be impossible to do all of the above when you are injured in a bicycle accident. Do what you can. However, make sure to speak to one of our New York City bike accident attorneys about your case. When we take on your case, we will follow up with all leads and make sure to secure as much evidence as possible.

As experienced New York City bicycle accident lawyers, our lawyers are familiar with the processes necessary to secure favorable settlements or compensation for injured clients. Our lawyers’ knowledge of personal injury law and our experience makes us uniquely qualified to help you.

A bicycle accident in New York can change your life in an instant. The bike accident can have a devastating impact on your finances, your physical health, the security of your family and your mental state.

With the cost of living in New York being already high and most people living paycheck to paycheck, you may not be able to afford missing out on adequate compensation for your bike injury.

It is worth noting that many cyclists choose cycling as their preferred commuting option so that they can save money. A bike accident means that the injured cyclist not only has to suffer severe injuries or death but also faces the risk of losing his or her job or income source.

We empathize with your situation and want to help you. If you have suffered a personal injury from a bike accident, the following can influence the amount you get as compensation or damages:

Many of these factors might affect how much you get as compensation. For instance, if your bicycle, worth thousands of dollars, was damaged in the bike accident because someone else was careless, you may file for property damages.

The process of securing the highest possible settlement amount can be complicated and requires the skills of a truly knowledgeable New York bike accident lawyer. At Hill & Moin LLP, every personal injury lawyer on our team has considerable experience with bicycle accidents. If you want a favorable outcome, our lawyers are able to go the distance for you. 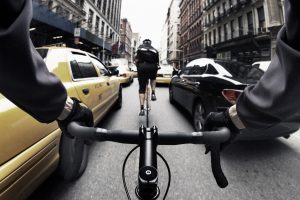 If you have been seriously injured in a bicycle accident that was caused by someone else, it is important to reach out to a knowledgeable New York City bicycle accident lawyer today. No time can be wasted, because at-fault parties and their insurance providers will try to minimize the value of the injuries sustained by bicyclists. Unfortunately, many cyclists who could have secured fair and adequate compensation are often without any compensation because the cyclists had no idea how to fight the at-fault parties and their insurance providers. On the other hand, you will improve your chances of getting the compensation that you deserve by having a proficient and effective lawyer by your side.

In our state, cyclists who are injured in biking accidents on the streets of New York can file multiple claims or lawsuits. These may include:

Injured cyclists who are partly responsible for the bicycle accident may also recover some damages or compensation. Please understand that the amount the bicyclists get as compensation might be affected by the degree to which they were at fault.

As you can see, filing for and recovering your benefits or settlement can be quite complicated. If we take on your case, the experienced New York State bicycle accident attorneys at Hill & Moin LLP will explain the difference between all of these claims and explain the benefits to which you may be entitled. For more information and clarifications, contact us at (212) 668-6000 for a free initial consultation.

Should You File a Police Report If You Are Involved in a NYC Bicycle Accident?

Yes, you should. Police reports are a necessary part of the insurance company’s investigation into your New York bicycle accident. A personal injury claim or no-fault insurance claim without a police report may be denied by the insurance firm.

If the insurance provider fails to deny the claim, the adjuster will likely offer you a considerably lower amount just because there is no police report backing your claim.

Whatever you do, make sure to file a police report within 24 hours of the accident. If there was a police officer at the scene of the accident, you may not need to worry about filing a report, as the law enforcement officer would have reported the incident.

If there was no police officer at the accident scene, make sure to report the incident as soon as you are able to do so. Insurance companies tend to take police reports seriously and consider the opinions provided before awarding compensations.

If you have been bed-ridden or unable to file a police report due to your serious bicycle accident injuries, get in touch with the lawyers at Hill & Moin who may help you with these essential steps.

Should You Wear a Helmet While Cycling in New York, NY?

Many New York City residents are swapping trains for bicycles while running their errands and commuting to work. Some are taking to cycling just to avoid crowded trains and buses. This surge in the number of New Yorkers who are riding bicycles means that there may be an increase in the number of bicycle accidents in the future.

When it comes to cycling safety in the city and throughout the state, your helmet is probably your best friend. A bicycle helmet is among the most important protective gear that a bicyclist can use. It can often be the difference between mild and fatal bicycle crashes.

Also, avoid riding at night. Cyclists who were involved in accidents between 6 PM and 9 PM accounted for the highest death rates, regardless of the season.

Hill & Moin LLP is a personal injury law firm based in New York City. We serve clients in the city and throughout the State of New York.

Our lawyers are very knowledgeable and experienced lawyers who understand the law and know how to apply it to your unique bicycle accident case. Our Personal Recovery SolutionsⓇ might make a huge difference in your case’s outcome.