Find us on Social Media:

The Law Firm of Hill & Moin received a $1.2 million verdict for their client who suffered a fractured leg due to police brutality. 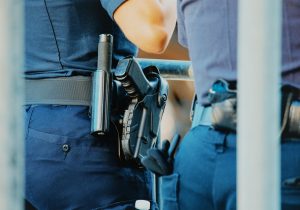 Police brutality is a term used to describe unnecessary and excessive force, assault, or verbal abuse used by law enforcement when dealing with the general public.  Everyone has rights, protected by the constitution and reinforced by law, that protect from them police brutality.  The Fifth Amendment states “No person shall be deprived of life, liberty, or property without due process of law.”  Therefore, constitutional rights prohibit excessive force, false arrest, and unlawful imprisonments.

Remember, though officers are entrusted with enforcing the law, they must still abide by the constitutional, civil, and human rights of the people they are arresting and charging with crime, regardless of the guilt of the arrested.  However, police brutality is still prevalent in today’s society.  Police commit many types of misconduct and injustices on the general public.  The types of police brutality that are commonly reported include use of excessive force and false or otherwise unlawful arrest.

What is Too Much Force?

A law enforcement officer may only use as much force as needed to maintain control of the situation.  Excessive use of force would include the use of weapons or unnecessary beatings.  Other examples of excessive force are: shooting an unarmed suspect, deaths while in custody, rape, physical assault, verbal or other harassment, use of racial profiling, and overall discourtesy. If a law enforcement officer uses force beyond the necessary amount to maintain control, the officer is committing police brutality.

In court, the accused law enforcement officials will have attorneys that will try to refute and devalue your case.  Having a personal injury attorney from Hill & Moin in New York, on your side that is knowledgeable about police brutality will help fight for your rights and counter the testimony given by the law enforcement officials.  You have the right to receive proper compensation for the injuries sustained as a result of  police brutality! Contact us today to see if we can help.